I’m terribly sorry about yesterday. You were so looking forward to your first game at White Hart Lane. It’s not always like that, honestly.

Did you have a good seat? It’s great up in the old East Stand. That’s where I sat for my first match too. My dad took me. He wasn’t interested in football like your dad is but he knew I wanted to go so much, he left my mum to look after the little sweetshop that we had, just down the road from your house funnily enough, and he gave up a Saturday just to take me to the Spurs.

The stand is still pretty much the same as it was then. It’s not modern like the other ones. We climbed up all those stairs. I dashed ahead of my dad, he was puffing and panting but I wanted to see the pitch as soon as I could. I remember standing at the top, looking down. It was so green. Like a magical place to me, seeing my team, my heroes. Something I had dreamed of. Now I was here. I was ten or eleven, a couple of years older than you.

Shall I tell you a secret? When I walk up the short flight of steps to the entrance, I still get a little excited. Look round, take it all in. When I walk from the car and am about to turn the corner where I can see the ground for the first time, I always speed up, just a fraction. It’s what being a football fan does to you. Silly, isn’t it? Don’t tell anyone.

Of course when I first went, you could get half price tickets for children. You didn’t have to pay £45 for each seat. Shirts didn’t 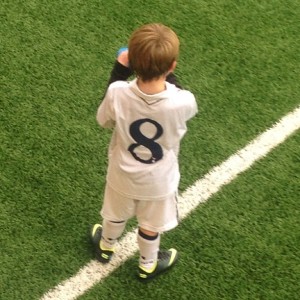 cost £57. On top of that, your Uncle Mike had come all way the from Yorkshire. And look what happened.

Over the last few years, Spurs have played fantastic football. Not always, and we’ve never been able to defend properly for all the 45 years since I ran to the top of the East Stand for the first time, but we have been part of some thrilling games. Yesterday was the opposite. We couldn’t do anything right, not for one single moment. I waited and waited for us to start playing well, passing the ball around, Lennon and Bale making runs down the wings, like I told you they would before the game. It felt like I was in a time machine that had taken me back fifteen or twenty years, when people like Gerry Francis, Christian Gross and George Graham managed the club, the players weren’t very good and we played like this all the time. I’m really sorry, Seth.

Some clubs have a tradition. That means that whoever is the manager, they try to do things the same way. At Spurs we pass the ball around. We have skillful players. We attack. It’s entertaining and it sometimes means we don’t win as many matches as we should, but that’s what we want at Spurs. That’s what they teach you in the Tottenham Under 9s, isn’t it? You are a midfielder, good at passing. That’s what they were encouraging you to do yesterday morning at the new training ground. Wish I could see it, sounds fabulous.

That’s the Tottenham way, and Seth, it’s the right way to play this beautiful game. Pass and move. Pass and move. Your dad said it was obvious from one glance at the Under 18s and Under 21s yesterday that all the teams at Spurs play that way. Shame the first team forgot about it.

Sigurdsson is an international. Did you see how he controlled the ball and then turned into the Wigan man next to him? Not one or two touches but four or five, not every time but but most of the time. Did you see how often he was tackled? Tom Huddlestone, did you know he’s played for England? He’s a great passer of the ball. Long passes mostly. Yesterday some of the passes worked but most of them didn’t. They stay in the air for ages so the defenders can get there first. I like Tom but he has to learn to pass the ball quickly  a short pass will do so long as he moves off into more space so he can get it back. He didn’t move around much, did he? I think you could have shown him what to do.

Do you know what managers do? They organise the players, tell them where on the pitch they should play, how they should move around, things like that. I expect your coaches do that too. Hope they don’t shout at you, though. I go and see games on Sunday in our local park and all the coaches and dads shout at young boys your age. I hate that. At your age you should try your best and enjoy it. If you do that, you will have had a good game.

Our manager is Andre Villas Boas. He’s young, he’s new and I want him to do well. He’s the Spurs manager, after all. So far he’s not done too badly – we were fourth in the League. Yesterday he did some things that were not so good. Wigan are not as good as we are but he started with two defensive midfielders, Sandro and Huddlestone. They play in midfield like you and hang back a bit to protect the back four. It’s a very important position because it helps the defence and starts attacks when we get the ball. Sandro was excellent before he was injured – did you see how he made tackles and passed it simply so we could attack once we had the ball?

You are good at maths. If you have two defensive midfielders, you have one less attacker. We made it too easy for Wigan because of that. Here’s some more maths. Wigan lined their players up like this: 3 at the back, 4 in the middle and 3 forward. It’s unusual but it worked. We had no space as we tried to attack. We just couldn’t get it forward and when we did, we only had one man, Defoe, up front. It also meant that Lennon and Bale, our wide players, were marked a long way up the field. They couldn’t get going. They are dangerous, so it meant we couldn’t play well.

The Wigan players aren’t as good as ours. We wouldn’t buy any of them but there is a lesson for you here – they played better as a team. Did you notice how they passed the ball to each other over short distances, then moved into space? They passed the ball the way they were facing, and passed it quickly. That means it is less easy for them to be tackled. It worked. Perhaps you can try that when you next play for Spurs.

Our manager could have changed his tactics but he wasn’t keen. I don’t understand why he took Defoe off. He wasn’t playing well but he needs other men to give him the ball. He’s our best scorer and we were behind. I don’t get it. Do you?

We really need need a big striker to play up front. Your dad has seen a few decent centre-forwards in his time, ask him what they do. We have Adebayor. He’s good but sometimes the manager does not want to play him, then Adebayor sulks because he’s not in the side. He has to wait, to try harder. Seth, you would play football all day and all night if you mum and dad would let you. That’s the right attitude to have. I bet all professionals were like that when they were your age. It’s a shame some of them have forgotten.

As you know, Seth, I go to almost every home game. That was one of the worst I’ve seen in the last twenty years, maybe the worst. Still, it doesn’t always happen but the best team won. I hope you enjoyed it, though. I hope too that you play well for Spurs. Part of being a fan is you watch them play badly, then after a while you start thinking about the next game, about coming back. That’s a real fan. Who knows, maybe in ten years time I’ll wave to you from the Shelf, except you will be on the pitch. I’ll still be there.

Say hi to your dad and Uncle Mike for me,