Why do we do it? The heartache and pain, the time, energy and money, the fury and frustration, all expended in support of a cause over which we have absolutely no control or influence whatsoever. Because we support Tottenham Hotspur. Read Julie Welch’s lovely, insightful and touching book and you will be inspired all over again.

More than just a history, The Biography of Tottenham Hotspur reaches into the heart and soul of the club. What marks out this club from most others is that it stands for something. Danny Blanchflower’s  famous statement that it’s not just about winning, it’s about glory and doing it in style, isn’t mere aspiration but articulates explicitly a culture and identity that dates back to the origins of the club in the 1880s on Tottenham Marshes.

For Tottenham Hotspur, it has to be good football, creativity and innovation. The Spurs Way is the right way. The pass and move approach lauded at Barcelona brought Spurs a league title in 1951 when Arthur Rowe called it ‘push and run’.Back in the early 1920s another great manager Peter McWilliam defined his tactics in exactly the same way. The mixture of flamboyance and exasperation, the sublime and the erratic that is familiar to readers of this blog would be instantly recognisable to Spurs fans of past generations.

As befits a biography, the book describes the club’s history while allowing the character to unfold and open up. Like Spurs, the 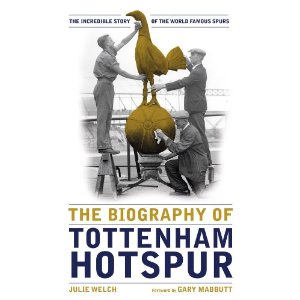 writing is easy on the eye and draws you in. This is no dull history textbook. Rather, Julie is a storyteller, engaging and curious. She communicates her passion without allowing her voice to intrude or detract from the telling of the tale. It’s a measure of her skill and dexterity that she makes the journey from Tottenham Hale through the industrial landscape that covers the old marshes to our first pitch sound enthralling. And she’s not averse to the occasional gratuitous dig at our rivals: after all, she is a lifelong fan.

She freshens familiar tales such as the success of the Double side, the Nicholson era or the sordid conspiracies that brought the Gunners from Woolwich to north London, and by placing them in the broader context of the club’s culture and origins, enables the reader to look anew at more recent events that we’ve lived through. It kind of sneaks up on you, involving you in the story then in a couple of killer sentences nails its wider significance like a fine historian should. Be warned – set aside some time when you first open the covers because you’ll want to keep the pages turning, just to see what happens next.

Not all of which makes for pleasant reading. The late eighties onwards was a sobering read. Gross, Graham and Francis, and the inglorious reigns of Spurs idols Ossie Ardiles and Glenn Hoddle, goodness me how dispiriting they were, but as the current side teeters on the brink of new glory or yet another near-miss, it brings a vital sense of proportion. Being a fan isn’t about instant gratification. Read it and I defy you to rant on about the all-consuming Champions League.

Nothing really changes. Around the turn of the century the club was run by two dynasties of Jewish businessmen. ‘Up and coming club taken over by wealthy businessman in order to enhance his prestige. Club moves ground’ – 1890s or early 21st Century? ‘Club buys Scots, leads to great team’ – 1890s or 1950s? ‘Finances restricted by ground improvements, team slumps only to be rescued by a saviour who changes fortunes totally’ – that’s just page 58.

This is an enduring love affair. For better or worse. In any long-term relationship, there’s some give and take, although I suspect we supporters have put more into the relationship than the club has given back over the years. Through the anger and disappointment,  having been let down so many times, it’s worth it because when she touches me, nothing else matters. It’s a passion that makes us swoon and shake with unbridled joy, an experience like no other. Share that with thousands of others at the Lane and these are the unforgettable moments that make life worth living.

Look out for an interview with the author Julie Welch, coming soon.

12 thoughts on “Review: The Biography of Tottenham Hotspur by Julie Welch”