For any club, moving to a new stadium is fraught with peril. It takes time, energy, a steely determination to win over all the interested parties, money, then more time. Some clubs ruin themselves in the process. Spurs, under the cautious stewardship of Daniel Levy, have spent years laying the groundwork, then the ultimate irony. On the day planning permission is granted by the council and the new ground is closer than ever before, comes the news that we may be off to east London.

Levy is known for his love of last-minute business, so here’s a window and he just couldn’t help himself. Last Thursday was deadline day for ‘expressions of interest’ in moving to the new Olympic Stadium and our name’s on the list.

Later that same evening, Haringey Council approved the revised planning application for the new ground right next to the Lane. This has been in the pipeline for several years now. The club have gradually bought up all the land in the vicinity and have overcome objections from a number of groups, including English Heritage. Now without any intended disrespect to the hardy residents of N17 0AP, there’s not a lot that could be done to make it worse, now could there? But we’re there now, admittedly with a reduced number of dwellings to be built on club land, the proceeds of which will go some way to cover the £400m cost of the project. Boris has to give his seal of approval, then we’re away.

It took a few days and some predictably inflamed comments from the Porn Twins (Sullivan: “If it happens, there will be real problems that could easily lead to civil unrest. I think there could be riots”) before the full implications sunk in. Although the papers cranked up the story, most of us accepted that Spurs were just covering themselves in case of a last minute slip-up. ‘Expression of interest’ isn’t saying very much. Then, the management of our ‘partners’, American company AEG, were bullishly quoted in the press. The Guardian was unequivocal, in the headline at least: ‘Olympic Stadium Now First Choice for Tottenham.’

I find a move to the Olympic Stadium hard to accept, in terms both of the evidence before us and the effect it will have on Spurs fans throughout the world. Spurs have poured years into the project, the development costs of which have been variously estimated at between £30m to £50m already. It finally has the backing of the Council. Finance is being put in place. The costs are not out of the question given turnover and demand. 56k+ is a lot of cash at Spurs’ CL prices. It will be hard to turn back now.

However, for the fans, this is about the heart not the head. The plans are a remarkable achievement, provided that we really have the money, but let’s leave that one for now. I desperately envied the Arsenal, not for their sterile ultra-modern stadium but for the fact that they built it so close to where they belong (OK OK insert your own gag here, you know what I mean). These things are important to fans and we have that in common with them. With space in London being at such a premium, it was a feat that surely could not be repeated by any other top club in the capital but I underestimated Levy, not for the first time.

Moreover, it’s a proper football ground. The club have apparently responded to fans’ feedback with stands close to the pitch and steeply tiered so there are good viewing angles all round and no one is too far away. The roof will hold in the atmosphere plus there is an ‘end’ to focus the support. Recently I’ve heard several pundits compliment White Hart Lane on the atmosphere. The numbers may be low but, enclosed and intimate, we can make some noise and it will echo and inspire, just like the old days. This won’t change.

Contrast this with the wide open spaces of the Olympic Stadium. We can wave to the players over the running track. I love athletics but not even Chirpy kills a football atmosphere more than those 8 lanes.

The problem is, this counts for little when it comes to planning. We the fans probably have a greater attachment to this most deprived of areas than many of the residents, but we don’t vote. That’s what counts for councillors already thinking of the next elections. Granted we bring much needed income to the place on matchdays but much of that ends up outside the borough. The cleaning and catering staff, the stallholder, the foodsellers all take their cash away.

Talking of cash, east London could save up to £200m, a not inconsiderable figure, especially on the day Liverpool are trying to implode. 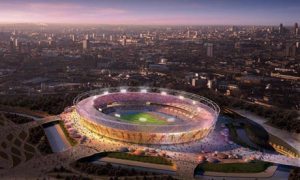 Also, getting away from the Lane is bad enough as it is, but with another 18,000 I’m thinking that a helicopter is the only way to go. Anyone who has tried to escape from the Emirates will know what I mean, and they have 3 tube stations within 5 minutes walk. Tempted by the purpose-built stations, the wide plazas and relaxed setting of the Olympic park?

Me neither. The answer is ‘no’ and Levy needs to hear that loud and clear. If one good thing has emerged from this, it’s that I’ve realised how attached I am already to the new ground. It’s out of the question. Totally. Good news WHammers, it’s all yours. Get up a petition in support of your application and bring it to the Lane next home match. With all the signatures you’ll run out of paper. We’ll welcome you with open arms, cuddle and lace daisies in each other’s hair.

I suspect Levy thinks the same. He’s covered his bets, as a responsible chairman should, and at the same time nudged both Haringey and Boris in the right direction. I can’t vouch for the exact sequence, but I’m sure Haringey Council knew about our Olympic interest when the time came to take the decision. There’s some hard negotiating still to be done, especially regarding the redevelopment of Tottenham Hale station, but Levy’s not bad at the negotiating lark, as we’ve seen before.

Not least, West Ham’s bid is probably better. They have the local connections, although large sections of their support are not keen, and theirs is a joint bid with Newham Council. This will play very well with decision-takers tied into some concept of leaving something behind for the community once those two weeks in 2012 are over.

I drive past the Olympic Park on my way to and from the Lane. It’s odd to think that the eyes of the world will marvel at the design – it will look fabulous – yet all I see are the crabby dilapidated buildings adjoining the A102. Even odder, however, to conjure up a vision of this as the New Lane.

It won’t happen. AEG for reasons of their own image have gone overboard and this afternoon the club have issued a downbeat statement on the official site. http://www.tottenhamhotspur.com/news/articles/stadium-plans-update-061010.html Levy comes over as a cautious, taciturn figure but the new ground, our new ground, is his legacy. He’ll do the math but he’ll feel it in his heart too. He won’t turn away from that.

There’s a good business take on this by Martin Cloake, author of several Spurs books: http://www.dailyfinance.co.uk/2010/10/01/spurs-400m-stadium-plans-boosted/

9 thoughts on “N17 Has Never Looked So Sweet”