Spurs versus Manchester United remains one of the classic encounters in any season. Lacking the blood and thunder of London derbies against L’arse or Chelsea, nevertheless the tension is palpable and the air crackles with excitement and energy in the early exchanges.

On such days, matches are won or lost in fleeting moments, where the masters remain calm amidst the bedlam of a baying crowd and flying tackles, where poise becomes a commodity temporarily more valuable than the most precious mineral, where everything that has gone before counts for nought, there is only the moment.

Yesterday, early in the first half, Luka Modric was that master. Surrounded by three players, without ever taking his eye off the ball, that ball so close to his boot as to be somehow magnetised, he shimmied and swayed, hunched low to the turf and rolled away into free air. Over in a second, it was an instant of sublime mesmeric brilliance.

Immediately the ball was on its way, thirty yards curling into Alan Hutton’s stride. He delivered a firm near post cross at ankle height. Then: the moment. At pace Crouch and the defender stretched together, the defender’s hope turned in a heartbeat to anguish as the Spurs man was ahead of him. He got there first, made firm certain contact and… another heartbeat, the ball rammed against the hoarding behind the goal. The moment was gone and so was the game.

It was not easy, hand on heart nothing is in the Prem whatever we may think from the safety of the stands, but it should have been taken or at the very least on target. A shame because it would have been such a glorious goal but the trouble was, rather than being the first of many, it was in fact one of a precious few.

United started well. Early on, they threatened to pull us out of position and eventually out of our misery with their familiar movement, power and running from deep. However, they couldn’t find a spare man in the box and Dawson in particular once again stood strong, tall and proud.

However, we gave as good as we got and gradually pushed United further and further back. We had plenty of possession, kept it too, and maintained that high tempo that suits us for the rest of the half. Rafa was alert and Bale threatening down the left but apart from one Rafa header, he found no one to get on the end of the crosses. Some could have been more accurate but there were enough to make Van der Sar work. Two in particular flew across the edge of the six yard box, where wingers have been placing the ball for the last 150 years but our men were hanging back. Someone should have been there. 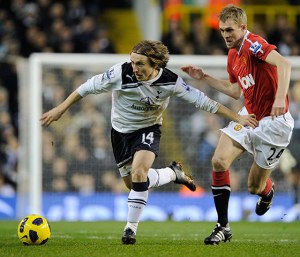 Darren - Mate - You're Good But You Won't Get Near Luka Modric

United were not at their best but posed sufficient threat to prevent our midfield from getting into the box enough. Crouch was often isolated and Rafa’s link-up play not at his best. The burden of striking duties fell to Crouch and he disappointed. Never dangerous, Vidic and Ferdinand handled him easily.

I have no desire to be consistently critical of one of ours but honesty will out. Watching him yesterday was like intruding on his personal and private grief. He kept going for the whole game but to little effect, and he knows it. At times he was so uncoordinated, he looked like a puppet where half the strings had been cut. Scant consolation but he appeared to suffering at least as much as we were.

As I’ve said before, however well he performs, his style is wrong for our side. Luka and VDV want some movement up front, someone to pass to, not a stationary item perambulating around the box.

Modric was outstanding. I guess at some point he lost the ball in the tackle but I can’t recall it. Working back and hammering forward, passes long and short, he was the game’s driving force. Surrounded by world class footballers, he was head and shoulders above them all.

Is it so wrong for one man to love another? As giddy and goggled-eyed as a love-struck teenager, I worship Luka’s every movement and each precious gesture, every pass an object of desire to be cherished and immortalised in the memory. After the ball has gone, my gaze lingers for a further furtive fraction, just because I can. Gone are the days when I felt protective toward this frail figure as the premier League midfield behemoths bore down upon him with glinting studs and malice in their hearts. I have long since learned that he is more than capable of looking after himself.

Ironic then that my previous muse was also on the field. Dimi oh Dimi, how could you forsake me so? I wasn’t like the others. I saw through the pouting, the sulks, the lack of effort, even, at the end when the break-up all got a bit nasty, the tantrums and the way you behaved towards us. I prefer to recall the dazzling control and nonchalant brilliance, the effortless ease of a touched first-time pass or a volleyed goal as the ball dropped from the heavens.

Perhaps you’re the type I go for, hard-to-get, act surly and give me the run around. Worth it, worth all the pain and heartache, just for a few precious moments when you’re on fire. If we had stayed together, what could we have become? Truth be told, I’ve never really got over you, and secretly hope you’re happy with your new rich and famous partner. What you would do in this team, it doesn’t bear thinking about…but I do. How I long for your return.

A thrilling first half started to run out of steam by half-time. Far from the break being rejuvenating, the trend continued. After about 70 minutes, we were on top with much of the possession but running out of ideas. After that we rather went through the motions. The tempo dropped and even Rafael’s dismissal couldn’t revive our flagging spirits. Rafa temporarily perked up and ripped a bit deeper as finally Defoe came on but by this time the United central defence were solid and settled. Van der Sar had a relatively straightforward afternoon. VDV put the best chance an agonising fraction over but we never pierced the heart of their defence.

Much has been made in the media of United’s sterling defence but this is our 4th clean sheet in 5 games. We can be open because of our attacking preferences so it is essential that we win the one to one clashes, or else there is often not much in the way of insurance. Yesterday all four defenders did well in this respect, coming away with the ball on the ground and not allowing United a way to progress.

I was looking in particular for Benny to have a good game in such a high profile encounter, because he’s been on the receiving end of undue and, in my view, unfair criticism. Hansen chose to have a go after the Everton game, when to be fair he did not play well. Now others are jumping on the bandwagon, Perry Groves the latest on 5Live on Friday. It’s classic punditry – largely a mess of received wisdom rather than doing what they are paid to do, watch lots of matches (oh the hardship) and make their own minds up.

Sadly he probably didn’t do enough to redress the balance. Plenty of sharp tackles and good interceptions but also a few moments where he let slip a ball that should have been dealt with, fatally over-playing and presenting United with two excellent opportunities. On the plus side he supported the attack better than in recent games, using the space that Bale creates (because he takes at least two defenders with him wherever he goes) to get wide.

In the second half, United made us play more down the right, that is, to keep the ball away from Bale. Refreshing though it was to see Hutton’s natural game at attacking full-back, the contrast was all too apparent between his hit-and-miss approach to distribution and Corluka’s recent reminder of how well he plays Lennon into the game. For his part, Lennon partly put aside an anonymous first half  with some exciting forays down the wing but little came of them. VDV, as if over-compensating for the faults of others, tried too hard and wanted that extra touch or tried a wayward flick in desperation.

Palacios had a reasonable match, diligently sweeping up in the middle. The problem came when he moved forward,. United safely left him as the spare man, their attentions occupied by others, because his distribution and shooting were simply not a danger. At this level, you can’t afford a central midfielder who can’t pass, whatever his redeeming qualities. 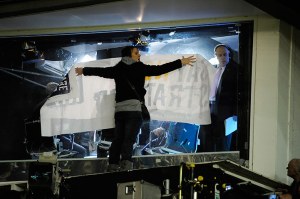 dominance. It’s also a sign of our stagnation that we do not have a high quality striker. I can’t fathom why Defoe, for all his faults, did not come on sooner but then again I can’t quite see why Crouch was picked to start. Maybe Harry thought that United are vulnerable on the flanks so we needed a big man to turn a plentiful supply of crosses into goals. However, leaving aside the excellence of Vidic and Ferdinand, it’s an overestimation of Crouch’s abilities to believe he was the answer.

Before the game I’d hoped to join in and report back on the ‘We Are N17’ pre-match protests but by the time your intrepid reporter reached the Bell and Hare, only the petition clipboards remained. On twitter I enjoy the morning comments – “play with the kids, breakfast then off to the Lane, few beers, meet friends” etc. For me it was walk the dog, hoover, put the washing on, load the car, down the dump, miss breakfast, tidy the garden then off.

However, I could celebrate the brave young woman who in suffragette tradition, threw herself not in front of a horse but of Andy Gray’s punditry quips. More painful, clearly, than the thundering hooves. The best half-time entertainment since Chirpy and the deckchairs.

She balanced precariously on the gantry for the sake of the N17 campaign. Did it appear on TV? Take a bow. Seen as well as heard. It took gumption to do that, go girl!

11 thoughts on “Modric the Sublime Master But In The End, Frustration for Spurs”