Luka, goodbye and good luck. I’ll only remember the good times, and they were rich, plentiful and sweet.

The finest midfielder to wear the shirt since Gascoigne, on his day he made the team hum with energy and purpose. He was the link between defence and attack, taking the ball from the toes of the back four and looking up, always looking up. In his mind’s eye he saw not what was happening but what could happen. Pass and move, the ball had barely left his foot before he was gone into space, finding some where before there was none. Available and ready, pass and move.

Loutish uncouth opponents clattered in, lured by the thin, bony frame,but they arrived and he was gone, riding the challenges and 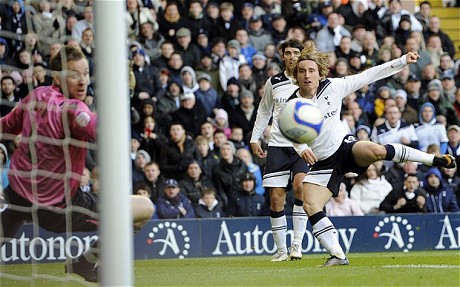 away. Pass and move. The Tottenham way. This was his home. Many looked his way, we made eye contact and began a 4 year love affair that sadly ended as all affairs do but the ecstatic pleasure will last until I’m old and grey.

When he played, Tottenham played. He dictated the shape and pace of the whole game. He oiled the cogs and powered the engine. He demanded attention so his team-mates had more time and space. They made a run, knowing Luka would find them. Too often he paused at the edge of the box, instinct compelling him to roll the ball into channels, only to find others on a different wavelength. But when it worked, Spurs sang a song of joy. Flowing, easy movement as natural as breathing yet breathtaking given the ferocious pace and physicality of the modern game. Too late now but watch him from pitch level. We spectators merely have to sit, not worry about a bouncing ball or stalking defenders, but he sees gaps where you see massed ranks of defenders, he sees opportunities where you see only threats.

Every great player has their trademark, something which makes them stand out from the rest. Luka could pass short into the channels or take half a team out of the match with a sweeping diagonal stretching 50 yards. He buzzed around the edge of the box or drove us onwards  from deep. But I will always fondly recall the way he took a ball under pressure, often his own half and with his back to the onrushing tacklers, and with a dip of the shoulder send them one way as he went the other into clean, fresh air.

For many the undignified end to his time at Spurs has tarnished his reputation. Whilst I have no wish to either ignore his refusal to play or make excuses for him, frankly it didn’t much matter. Sorely peeved after his move to Chelsea was vetoed last season, he knuckled down and gave his best. This summer, he was always going to leave and everyone knew it. Pointless to play him for just 2 games if we are rebuilding the team, although goodness knows we missed his creativity. If he went on strike as is rumoured, we probably saved a few bob on his salary. We can’t begrudge him a move to one of the two most famous and illustrious club sides in the world, and he had the good grace to shun Chelsea and United. 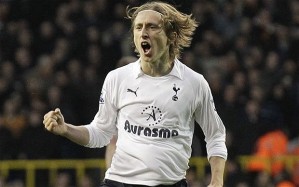 Even so, this isn’t the way to remember him. Players come and go, only we the fans are constant, lasting, loyal. And what do we have if we don’t have good memories, golden exuberance that balances out the drudgery and pain. That’s what supporting a club is all about, the precious moments that linger for a lifetime. Ask yourself this – when you tell your wide-eyed children or grandchildren about this wonderful game,  this great club and its heroes, what story will you spin? Majestic players who left the crowd spellbound, or contract negotiations?

Some say Luka Modric is not all that. Over-rated. Ineffective. Never mind show me your medals, show me your stats. Where are the goals? Where are the assists?  He should have scored more, of course he should, a man with his sublime touch couldn’t connect cleanly, I can’t understand that. But he played deep, he made the pass to the man who made the pass yet that’s discounted. He lifted the side when times were rough. Miserable and wretched stats, the curse of the modern game where there’s no need to make up your own mind, to have an opinion, to even watch the match, just count.

Let’s therefore expunge the memory of the Tottenham greats. Let’s rid ourselves of the others who don’t match these standards, starting with another midfielder who only played in 20 minutes spells, who couldn’t kick a dead ball for toffee, who scored only 16 times in over 220 appearances, who tired as the game went on. Ossie Ardiles, a peerless maestro who ran the game in those 20 minute spells and picked up a World Cup winners medal along the way.

With Ossie as with Luka, remember them for what did rather than what they did not. They conjured magnificent creations of joy and wonder on the pitch. Luka, thanks for memories. I’m glad my children could see in their lifetime a midfield player as good as you. They understand. I wish I could have seen you, for one last time, not to change your mind but just to say, I miss you. Good luck, goodbye.