I’m struggling to recall a Spurs game that I enjoyed less than Sunday’s match against Everton. The absence of ideas or inspiration. The inability to pass the ball. Eriksen unrecognisable as the creative hub of a top-class team, unable to control the ball let alone the midfield. Gomes’ injury – my very best wishes to him.

I have of course seen Spurs play worse, a lot worse. When I tweeted about this, a few people mentioned Colchester and Brighton this season, or end of season Newcastle. But these did not have VAR, an absurd, incomprehensible blight on the game of football, sucking the joy and numbing the excitement from a game that has entranced billions for a century and more. Winning and losing is important but VAR proves that some things matter more.

The game was virtually juddering to a halt without VAR’s assistance. Neither side was capable of stringing together a vaguely coherent move. Spurs were slowing everything down, holding ankles and heads after most challenges, while Richarlison hurled himself to the turf at every opportunity. The extended examinations of the two possible penalties, Son and then Dele’s handball, were excruciating for me watching from the comfort of my sofa. I’m certain the people who paid good money for the privilege of being the last to know what was going on felt worse.

These problems are intrinsic to the VAR system. Once you scrutinise decisions with the technology, you can’t unknow or un-see. You look and keep looking. Football seldom lends itself to clear-cut decisions. The Dele incident was the ultimate farce, and I say this on a weekend when a player’s armpit was ruled to be capable of scoring a goal. If it takes refs in front of a bank of screens over two minutes to make a decision, it’s not a clear and obvious error, regardless of what that decision is. Therefore, referees should look a few times, decide whether clear and obvious comes into play, and if not, review ends. Doesn’t matter if it is a penalty or not. But they can’t unsee it, so they’re sucked into the decision from scratch, penalty or not.

The Son penalty – a couple of minutes, restart then they come back to it after another angle is made available, according to Tyler on Sky. Why on earth was that angle not made available in the first place and more the point, who decided it was or was not available, because human beings run VAR? I don’t excuse Son’s tackle on Gomes in any way and I think common decency means Spurs should let it go and not appeal, but changing yellow to red was not on the basis of the tackle itself.

VAR has added to the controversy this weekend, not quelled it. The waning authority of on-field referees has been further diminished by their colleagues in the studio. Match-going fans can’t celebrate without a nervous look at whether the ref is sticking his finger in his ear. And, to repeat, that’s why we pay cold hard cash, a lot of it at Spurs, to tell stories of being there, to remember the moments of exhilaration and elation that only football can provide, unsurpassed by anything in the world.

The way VAR works in the PL hammers home a reminder to match-going fans that we don’t matter. We are the last to know because VAR is a product designed for television. Television, or at least big business in football and in the media money men who sign the contracts want predictability, to exclude as much of the unexpected as they can. For us the unexpected is fundamental to the appeal, a game where many things may be unlikely but anything is possible.

It’s not as if we need a reminder. This is on top of achingly high ticket prices and, as on Sunday, no public transport from London to Liverpool. So out of touch are Sky, Martin Tyler interrupted his droning 90-minute monologue to complain that the station should be open when big matches are on, oblivious to the fact that his employer changed the kick-off to this date and time, knowing about the transport problems. Sky as the centre of the universe.

Without fans, football is nothing. A cliché but true. Except that football chooses to make it as hard as possible to enjoy the experience. In the past, supporter dissatisfaction in the ground is marked with abuse, in time honoured fashion. So far, supporters are getting behind the manager, which I endorse. However, what we’re seeing is a lot of grumbling, sure, we’re football fans and that’s what we do, but also people not coming to games. I know a few diehards who have barely been to games this season. When the time comes, they’ve lost their enthusiasm. When the fun stops, you start doing your sums and ask if that credit card bill is worth it.

Not enough of our money has been invested in the team we’ve come to see. The gaps are less visible at the moment because many tickets go to football tourists or fans who have not yet been to the new ground. These prices are storing up trouble for the club because fan dissatisfaction affects the team negatively too.

There’s always been an unspoken bargain between all fans and all clubs. We don’t ask for much and we’ll put up with a hell of lot to follow our team, and in return expect pay some attention to what we want. It’s not the fortunes of the team that is the tipping point – we’ve ridden ups and downs before, and we’re still here. Just don’t exploit us endlessly. Football is fun, or should be. At the moment, the equation is way unbalanced. We know that if we don’t turn up, and I always will, Spurs will fill our seats with another customer number. Sky plus VAR plus prices is a toxic mix. 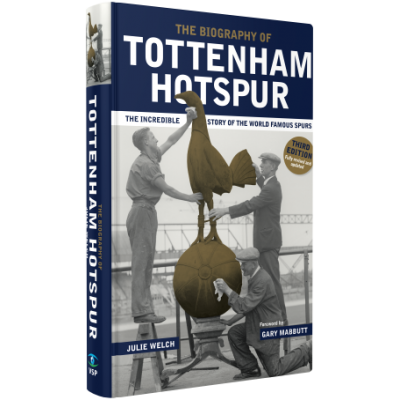 To cheer us up, Julie Welch’s terrific Biography of Tottenham Hotspur has been updated and the third edition is out now. A revealing insight into the club a beautiful book wonderfully written, essential for Spurs fans, as I said at the time. My review on TOMM is here

And relax, deep breath, in, out. Except I can’t relax because Spurs are sinking fast. Should have reached this point in the article earlier, but the VAR rant ran away with me.

I’ve wasted enough of your time already so let’s keep this short. Another reason why Sunday was so awful, as if one were needed, is that the gloom and mist has settled on the side and it’s not clearing in the foreseeable future.

Pochettino: I love him but he’s got some hard work ahead. I think that over the summer, he took stock. Legitimately, he could say that he had the basis of the team, tactics, fitness and motivation that he wanted. Sorted. The core of the side were experienced players. We’d demonstrated our resilience.

Poch likes to get the ball forward quickly. Attacks build from deep, from the moment we win possession. Therefore, he bought creative footballers to achieve this. We needed them. However, he made a couple of assumptions, which for what it’s worth I shared, that have proved to be wrong. The defence is not strong enough. We sold a full-back without replacing him. I cannot fathom that a club with our supposed aspirations and where full-backs are vital to our pattern of play could make such a crass error. Levy knows the answer and he won’t tell.

Poch also assumed that everyone shares his commitment and motivation. They had up until then, so it’s a reasonable assumption, but Toby, Jan and Eriksen are off their games, in the case of the first two by just enough to make a significant difference. Rose is brave but waning. Above all, we don’t have a defensive midfielder. Poch has never liked a purely defensive minded player. Wanyama and Dier were necessary steppingstones towards his attack-minded fluent building from the back. But now we look weak and undermanned when sides attack, not just when Aurier flounders but also there are gaps between our centre halves as we get pulled this way and that, even by sides as limited as Everton or Watford. We don’t have wide midfielders capable of digging in for ten minutes to cover out wide, as our awful defending at Liverpool proved. Dier’s vacant, distant expression when the camera caught him unawares told you everything you need to know about where he is right now.

Poch’s book portrays a deep thinker where values and doing things the right way matter.  He knows that doubt can be the seed of progress, because doubt puts a leader in touch with what is going wrong. Then, he must lead change.

Outwardly, he must show certainty. Instead, his teams show the truth, that he’s struggling to find a solution. The last time this happened, he exerted his authority and booted out the miscreants. Now, he doesn’t know his best team or formation any more. He can’t trust his players to deliver. His alternatives are limited. As I said in my last post, the squad restricts his options because of the lack of right-back cover, Wanyama and Dier a yard off the pace for almost a year, no alternatives if Kane is out, no youngsters with enough match experience coming through because they don’t go out on loan.

Pochettino needs the support of fans and his chairman in finding a way forward. It may provoke Levy to spend in January, but, well, you know, you’re heard that one before. In any case, those players won’t be fit enough to slot in.

It’s hard to see what could change in the immediate future. Maybe VAR is affecting my capacity for optimism. Eriksen has been superb for Spurs over five seasons and one bad one won’t change my assessment of his influence, but he’s woefully off-form and should not play. Foyth, Sess and Le Celso must join Ndombele as the nucleus of the new Spurs. Play them now and plan for the future. Sunday’s game left me deflated and frustrated. I fear I’ll have reason to say that again before the season ends. COYS

24 thoughts on “Pochettino Searches for An Answer as Spurs Toil”